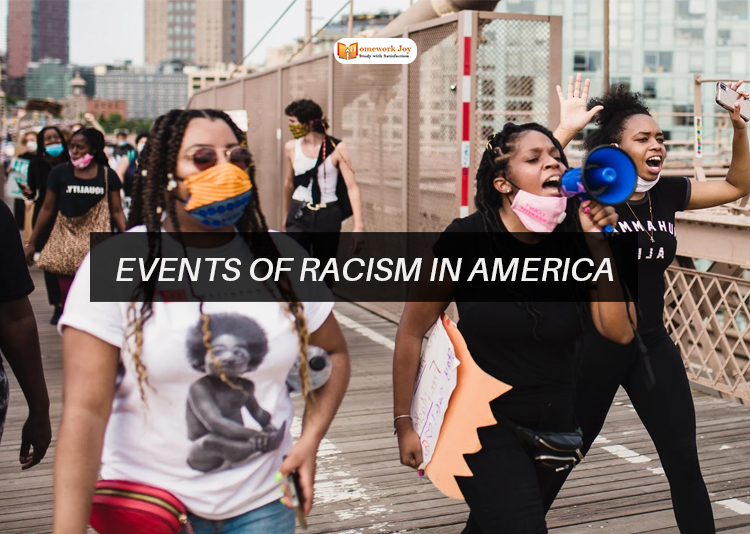 Racism in America is going since the 1600s. Over the years, many laws have passed to reduce societal differences. To make every state free of this differentiation and make the places better for living.

But it never got out, still; in the 21st century, we see the discrimination happened to black for minor or no reason. Here are the events in which Americans could not hide racism for these communities. Mainly from the year 2000, the events that took place.

What is Racism in America?

Racism is when one community or individual thinks to be above or significant in the race. Eventually, the result is oppression and control of their life’s decisions. Injurious attitude towards another race existed for millions of years, but methodize racial oppression started around the 1600s.

The USA is “the most powerful country in the world”, excelling in every field possible. Home to a staggering 614 billionaires and millions of intellects. With reaching new heights every year, there is one thing that the US has never gotten rid of, and that is ‘Racism.’

Somehow, while looking at the current situation, it doesn’t look like it ever got out of white people’s heads.

As per the current state of affairs, it seems like the people were pretending to be friendly and supporting civil rights as if they were under pressure. As we hid the dust under our carpet to make the floor look nice; but we all knew it had to come out someday.

Thereupon Donald trump came, and he jumped hard on that carpet to bring out the inner (dust) devil, and it spread like a virus all over the country.

Since then, we see discrimination against blacks, Asians, Jews, Italians, and people of another region pretty much daily. It’s not shocking nowadays to hear about people killed by stabbing or gunshot.

Incidents that shook the world and put a bullet right on the head of the Trump government. It was a mirror shown to the world that nothing has changed and equality for all is still a dream in America.

Although there are countless incidents in front of the world, America has always been a racist, and it looks like it will continue. Here are 21st-century major incidents in America that showed racial oppression:

The country got devastated and felt helpless, like a soul extracted from the hijackers’ body. Sooner, the military planned and invaded southeastern Islamic countries. to erase Al-Qaeda( the terrorist group responsible for the attack on September 11) from the map.

It changed America for no good reasons earlier; people were friendly with southeast Asian immigrants. The whole country used to welcome them, help, and hire them. But after September 11, doors for East Asia people were temporarily closed.

Somehow, if it was vital for someone to visit America, they had to go through hell. Yes, hell, because they used to get interrogated for hours. Mostly, US government employees used to cancel their applications.

By chance, they succeed, checking off their belongings, scanning through their body, and repeatedly firing questions about their actual purpose to visit.

All of this was happening to prevent people from coming to the states. Similar boundaries were created in people’s minds, leading to hatred against Pakistan, Afghanistan, Bangladesh, and other Muslim countries.

Amid the country, they get interrogated, often asked about their passport. Because of this, Muslims used to live in a constant state of fear. That anytime the doorbell will ring, and police will arrest them and put them in jail for years.

Citizens of the United States became islamophobia; publicly, Muslims used to get beaten or insulted just for their religion.

After all, the media and politicians ignited this behavior. Who repeatedly pushed the people to distance themselves and look down upon them.

Now that 9/11 happened 19 years ago, injuries on people’s hearts and minds have healed, but Muslims still face racism and hatred.

Despite the success of the civil rights movement in 1965 led by Dr Martin Luther King jr., racism never got out of America. The attitude of the police towards black people was wrong, uneven, and abusive.

In the year 2012, an incident happened that originated the hashtag #BlackLivesmatter.

On February 26, 2012, Trayvon Martin, a 17 years old schoolboy, was heading towards his relative’s place. The guard of that neighborhood, George Zimmerman, stopped him.

They must have had a dispute, and it turned into a rage. At that moment, George Zimmerman pulled the trigger on Trayvon Martin; eventually, he died. Though Zimmerman got arrested for killing, at his hearing, the judge quickly released him.

After what he said in his defense, the court freed him; he told the judge, Trayvon got violent at the moment. So for his self-defense, he pulled out his gun.

When this news came out, millions of people protested against the government and started #Black Lives Matter. It was evident the value of a black person in America. Trayvon was a kid, just 17years of age.

Barack Obama conveyed the message to the media that how sad he is after the death of Martin. Obama said, In his teenage years, he was just like martin. Also, it could be me past 35 years ago.

Another Kid Shot Down.

Similarly, in 2014, Michael Brown, 18 years old, was shot dead by police officer Darren Wilson in Ferguson, Missouri. Again, the man accused got released quickly. But this time, the scenario got out of the hands of the government as protesters lashed out on police and government buildings.

Protests were happening not just in Missouri but all over the US. The scenario got so tense that the army came to a stop to the activists who burned the shops, cities and robbed the civilians.

Since then, there have been dozens of events in which police have brutalized innocent black people—killing thousands of people for minor reasons. For instance, if someone is driving fast or someone starts arguing with them. If they find something suspicious, they arrest the guy.

The year 2020 biggest highlights amid the pandemic, which showed the true face of America to the globe. And how its leaders are shaping its present for the coming future. A 46-year-old man murdered over suspicion of a fake bill. Once again, it proved that racism in America would never go out.

No matter how much we developed as a nation, how superior we became. But being racist is in our blood. The whole world is in lockdown and isolating, making sure the virus doesn’t spread.

The killing of George Floyd forced everyone to wake up and thrash the brutality over the police.

The cases were rising day by day, but the people were motivated to step out. Millions came on the road, doing peaceful protests. However, some angry activists couldn’t bear it anymore.

Many historical monuments and statues got damaged, buildings burned, roads got painted as black lives to convey the message.

45th president Donald trump warned the public not to break public property, and he ordered the military at the sites of protest. But instead, the military rejected and even supported the protest.

Police officer Derek Chauvin got arrested and charged with murder and manslaughtering. Moreover, three other officers, who were present at the moment, were also charged for abetting the murder.

Racism in America was at its highest peak after the civil rights movement.