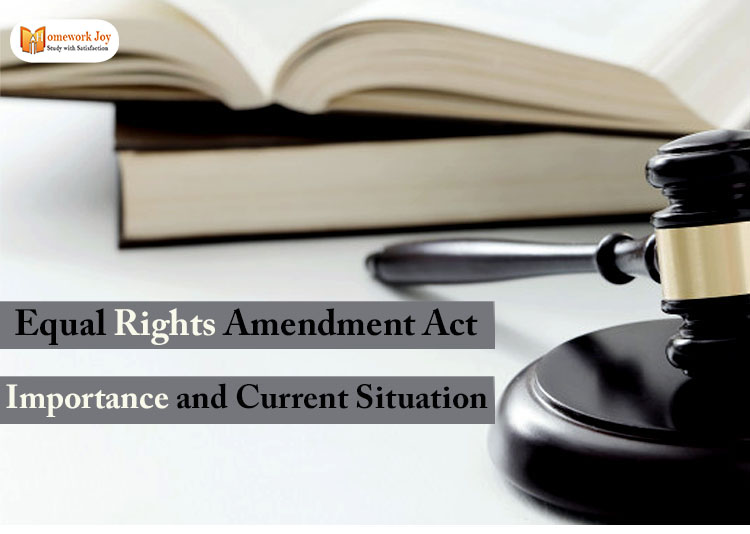 Women all around the US have been fighting since 1972 to ratify equal rights amendments in the country. From 1972 to 2021, 38 states have ratified the ERA, and Virginia became the latest state to ratify. The struggle that women and the LGBTQ community have to go through was unparalleled. Now, after a century of struggle, the equal rights amendment has shifted from giving women equal abortion rights. Here we will examine why it’s important and what its current situation is.

Also, Read: History of Pandemics in the World | A Brief Overview of the Worst Pandemics

What is the Equal Rights Amendment Act?

The Equal rights amendment act proposed modification of the constitution of the United States. It guarantees to give equal rights to every citizen of the US no matter what is sex, religion, etc.

It evoked the pointless advantages of male favoritism. So ERA became a barrier to egalitarianism amidst a patriarchal society. Egalitarianism is the identity of anyone and everyone who believes in equality for everyone and anyone.

Although when the equal rights amendment formed. A certain number of vicious factors of equality were also reinstated and considered as equal rights. It would’ve also meant dissolving the special rights that a woman employed with.

It is a rather significant and important factor that only a woman can traverse through. Moreover, dissolving those rights would’ve meant a petrifying situation for all the women. So this caused a stir to have equal rights while also retaining a certain necessity specialty. But in 1971, the house of senate approved an equal rights amendment.

The approval brought plenty of joy to all the women activists.

The flag bearers of ERA went to the house of legislative for ratification. But in response, a group of conservative women put charges against them, saying the ERA would not help women in any case.

This conservative women’s group head was Phyllis Schlafly, who argued that the act would lead to women being sent into the military. It would end sex crime laws, and irresponsible pregnant women would make Abortion normal. And after laws of divorce which men must pay to support child fees and financial support would end by women who want an independent life.

It would end social security laws benefits for house working women and widows. It would lead them to work and earn for themselves even if they don’t want to.

And last, all Americans have to pay taxes to fund abortions. In all her defense, she was so strong and fierce that the equal rights amendment wasn’t ratified. It required 38 votes for state ratification, but it ended up with 35 votes.

This led to a big fight for decades between conservative women and independent women.

Why is ERA ratification important?

If you take a look back at the history of mankind, women were always considered lower than men; they never got an equal opportunity ever. If they got a chance to stand for themselves, there was never equality, shown by the world. Women activists are fighting to ratify ERA from a century ago; it wasn’t started in the 60s or 50s.

Women in their workplace always get harassed and paid lower even if they work as hard as men. Even Phyllis experienced harassment in the white house when she went to the Republican office to meet the senate, to become the face of the party. But her fight became her ego, and thousands of women stood with her throughout. But the constant battle and contrary opinions caused nothing but an overdue delay in what was going to venture.

Besides, this was also suffered because of inner turmoil between various feminists about what must feature in ERA. And this was again another thing that agitated the delay as we know, but the eventual outcome was to grant women their desired right. It would just become a pointless effort to drag someone down just because they were born a certain way. These futile moments had also caused self-esteem as well oppressive insights into women that are to this date visible.

Moreover, women, instead of fighting, absolve the heinous acts, which is the vicious tool that the men crafted to control women. So it all alters to the sides of Domination Vs. The resolution and the resolution won. And we are grateful that we can hail and represent that ERA got approved, and women received the rights that they deserved. So the ratification first occurred in the state of Hawaii in 1974, on the same day when the amendment was approved.

Right now, ERA ratifies 38 states of the United States. Virginia is the latest country to ratify on January 15th of 2020. But still, there are 12 more states, and it looks like it will never ratify in the whole country. Because movement now isn’t about giving women equal rights but from the Abortion lobby. Politicians and doctors around the world are called Abortion (the ultimate form of exploitation ).

Activists are scared of the fact that the supreme court’s decision to make abortion legal within nine months of pregnancy will soon be reversed. Currently, ERA is all about abortion rather than giving equal rights to women.