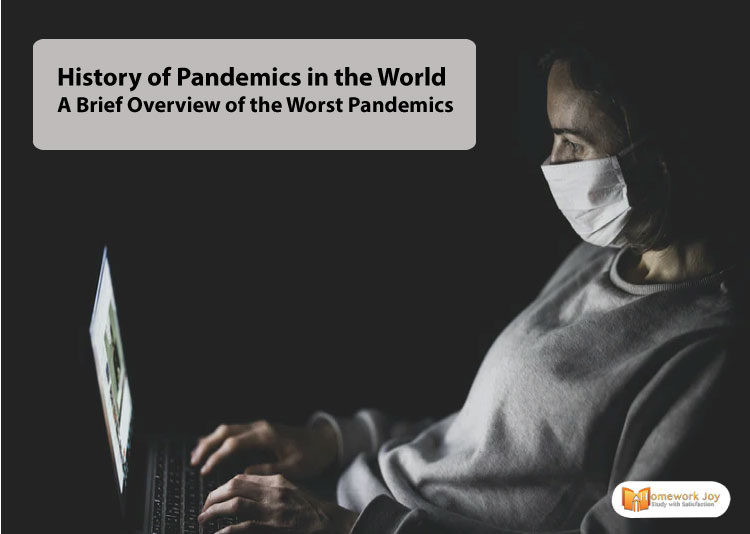 Our planet earth has a long history of pandemics. Be it SARS, MERS, HIV/AIDS, or the most recent, COVID-19 (Coronavirus). Moreover, time and again, various kinds of viruses spread in the world, taking the lives of many. Firstly, let’s know what is a pandemic.

A pandemic is an epidemic that occurs on a broad scale, crossing international boundaries and usually affecting people worldwide. Furthermore, a pandemic involves worldwide spread of a disease whereas an epidemic remains restricted to a city, region or a country. It’s seen in the history of pandemics that the viruses spread rapidly affecting a higher number of people.

The Antonine Plague, also known as the Plague of Gelen, erupted in 165 CE and affected the entire Roman Empire. Hence, the common symptoms were fever, diarrhea, vomiting, thirstiness, swollen throat, and coughing.

Black death ravaged Europe between 1347-1351. Consequently, the black end is a result of the plague caused by the infection of the bacterium Yersinia pestis.

The plague of Justinian spread during the reign of Emperor Justinian. It was the beginning of one of the first plague pandemic.

Yellow fever spreads through a species of mosquito common to areas of Africa and South America. In addition,the symptoms include fever, headache, nausea, and vomiting. Severe cases may cause fatal heart, liver, and kidney conditions. No treatment for the disease exists.

The Russian flu, also known as Asian flu occurred in 1889-1890. The flu took the lives of 1 million people out of 1.5 billion people. Moreover, the pandemic is one of the deadliest in the 19th century in the history of pandemics.

The Spanish flu is one of the deadliest in the history of pandemics. It infected 500 million people worldwide killing around 20 to 50 million people. Furthermore, the flu was first observed in Europe and spread in the United States before spreading throughout the world. The virus affects the respiratory system and and is transmitted through air.

SARS ( Severe Acute Respiratory Syndrome) is a respiratory disease caused by a SARS-associated coronavirus. The virus was identified at the end of February 2003 during an outbreak that emerged in China and spread to 4 other countries. SARS is an airborne virus and can spread through small droplets of saliva similar to the cold and influenza.

MERS also known as Middle East Respiratory Syndrome is a virus that transfers to humans from infected dromedary camels. Also it transmits between animals and people and is contractible. Moreover, the symptoms include fever,cough and shortness of breath.

HIV, also known as (human immunodeficiency virus) is a virus that attacks cells that help the body fight infection, making a person more vulnerable to other infections and diseases. There is no treatment for HIV, and no cure exists as of now, so if an individual has HIV, then it’s for life. In contrast, AIDS is the late stage of HIV that occurs when the body’s immune system is severely damaged because of the virus.

Swine flu is a virus that usually infects pigs and is caused by a strain of influenza virus. The symptoms of swine flu consist of fever, chills, sore throat, cough, nausea, and vomiting, etc.

Ebola virus can cause severe bleeding, organ failure and can even lead to death. The Ebola virus transmit to people from animals and spreads in the human population through human transmission.

Coronavirus is a newly discovered virus, and its symptoms include fever, cough, sore throat, shortness of breath, etc. The virus can lead to pneumonia, heart problems, liver problems, and even death.

For more such articles, visit www.homeworkjoy.com.