Home » Learning » A Lesson on Kinetic and Potential Energy 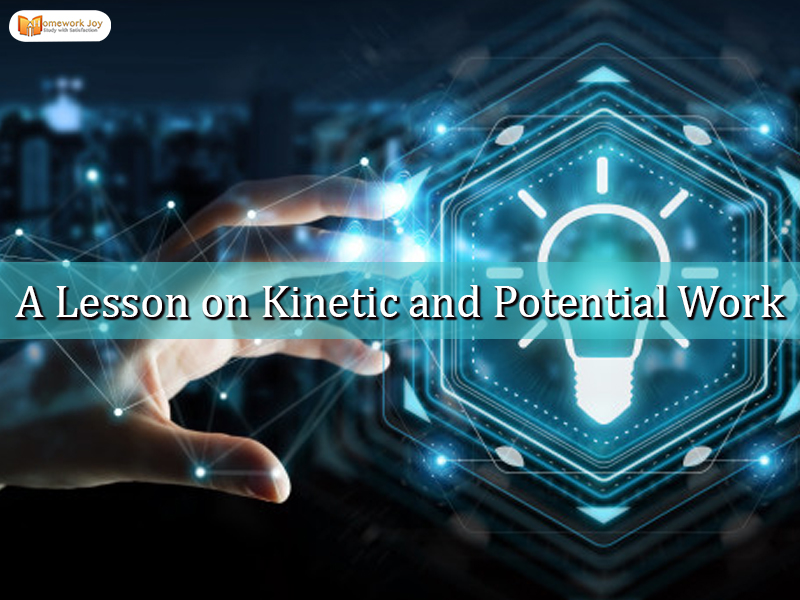 Let us first know in brief about Kinetic energy. In simple words, energy in physics is the capacity to do work. It exists in various forms, such as kinetic, potential, chemical, thermal, and so on — the S.I. The unit of energy is Joule (j), named after English physicist James Prescott Joule. Another common unit of energy is calories.

Moreover, there is heat and work energy, which is the energy that is transferrable from one body to another. Heat transferred manifests itself in thermal energy while work done manifests in mechanical energy. Yet energy can neither be created nor be destroyed, but it can only be changed from one form to another, this is the First Law of Thermodynamics.

What is Kinetic Energy and Potential Energy?

Kinetic energy is the energy that a body or particle has by cause of its motion. If you do the work by applying a net force, the speed of the object increases, thereby it gains kinetic energy. The work-energy is transferable. Kinetic energy is the energy that a body contains due to movement. It does not only depend on the move but also the mass of the object or particle. That is why it is sometimes known as the energy of mass in motion.
Kinetic energy (E) of an object is equal to one-half the product of its mass, m, and the square of the velocity of that object, v.
E= ½ m
Note that energy is a scalar quantity, that means it does not depend on the direction, and it is always positive. This formula is valid only for objects with low to high relativity, not for extremely high relativity. When the mass of the particle increases, then the law of proportionality must be used. The small changes in speed will result in a larger change in kinetic energy.
For example, to lift a heavy object upwards, we must do work to overcome the gravitational force. Similarly, to slide a heavy object across the floor, we must overcome the force of friction between objects and the floor. The work is proportional to the weight of the object and the distance it covered.

Carl Jung, a research scientist, quoted, “The greater the contrast, the greater the potential. Great energy only comes from a correspondingly great tension of opposites.”
Potential energy is the stored energy in matter. It depends upon the relative position of various parts of a system. For example, spring has more potential when it is stretched or compressed. A steel ball has more potential when it is raised above the ground because when it is in an elevated position, it is capable of doing more work.
Potential energy is the property of a system and not of an individual particle or object. It arises in systems that exert force on each other. In raising the ball, the additional energy transfers to the system, where it gets stored as gravitational potential energy.
The energy released during a chemical reaction is also known as potential energy. It comes from factors such as its position relative to others, internal stress, electric charge, or its condition rather than motion. The potential energy converts into kinetic energy when an object moves. The kinetic energy, unlike the potential energy, can be transferred from one body to another due to collision.
Potential energy tends to affect an object only if it gets transformed into another kind of energy. For example, a pebble which is at rest at the top of the cliff is a body that possesses potential energy. But when it rolls down, then it possesses kinetic energy.

Relation Between Kinetic and Potential Energy

After the explanation of kinetic and potential energy, let’s understand the relationship between them.
Kinetic energy is a kind of energy that already present in the body due to its property of movement. While potential energy is the kind of energy that is present in the body due to its state, Kinetic can transform from one body to another. However, the potential is not transferrable.
Kinetic energy has determining factors like speed, velocity, and mass, and potential has to identify elements as height or distance and weight. Potential energy is convertible into kinetic energy and vice versa. As mentioned above, the law of conservation of energy states that energy cannot be destroyed but can only transform from one form to another.
PE + KE = Total Energy
Note that total energy, momentum, and angular momentum in the universe never changes. I hope the above explanation helped you in understanding kinetic and potential energy and their relation with each other.