Home » English » 10 Types of Literary Devices You Must Know 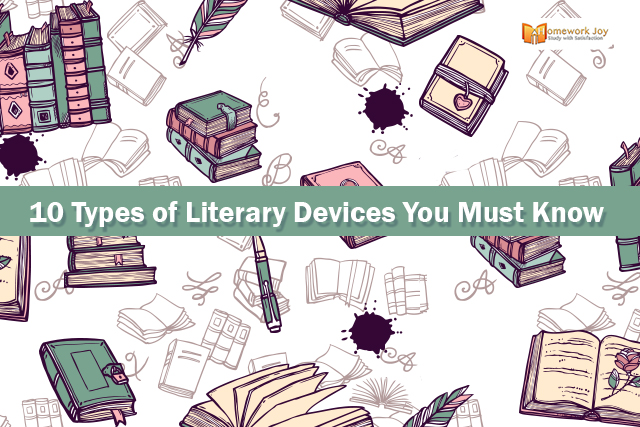 What are Literary Devices?

Literary devices are techniques that writers used to express their ideas and enhance their writings. To successfully appreciate, interpret, and analyze a literary work, you need to have strong foundations in different types of literary devices and their definitions.

These literary devices highlight essential concepts in a text, strengthen the narrative, and also help readers to connect with characters and themes. Writers use these devices to create a unique and pointed effect in their writings and to convey information. Poems with different types of literary devices can impose a more significant impact.

It is a type of narrative that uses characters and plots to illustrate abstract ideas and themes. In simple words, they are stories that represent a more general message about real-life issues or events. These stories are generally about morality, but they can also be dark, complex, and controversial.

For example, Animal Farm by George Orwell. This novel is one of the best-known allegories of modern literature.

It is a series of words or phrases that start with the same letter or sound. These sound mainly consonants to stress the syllable. However, alliteration commonly used in poetry, titles of books, and poems. Some many poets and writers often use this type of literary device.

For instance, Jane Austen is a fan of this device as he used alliteration in Pride and Prejudice and Sense and Sensibility. The best example of alliteration could be tongue twisters like “Peter Piper picked a peck of pickled peppers.”

Anachronism is when there is an error in the chronology or timeline of a text. For instance, an author writing a period piece and accidentally use language that is too modern. Yet, if the author wants to comment on the theme like society or time, then he can use this literary device intentionally. This literary device could be a character or technology that appears at a different time. Anachronism mostly used to give comedy effects.

Cassius: “The clock has stricken three.”

It is the use of casual, informal language and slang in writing. Writers use this type of language device to provide context to characters and to make their books more authenticating. And also, it helps to create believable dialogue. Authors often used it to lend a sense of realism to their characters. Forms of colloquialism contain words, phrases, and contractions, which are not real words. For example, “Hey, what’s up, man? This dialogue is a colloquialism.

In the epigraph, the author inserts a famous quotation, song, poem, or other short passages at the beginning of a larger text. Different writers wrote it and used it as a way to introduce general themes and messages at work. For example, “the sun also rises” is an epigraph that is at the beginning of Ernest Hemingway’s book.

A flashback depicts events that split up present-day scenes in a story. It is either before the time or before the time at which the narration takes place. It gives the reader more background information and details about specific characters, plot points, events, and so on. They present exposition for the story and gradually revealing to the reader what happened in the past. For example, the first part of Gone Girl has a flashback.

When the author hints events yet to come in a story, then it is foreshadowing. The author conveys tips through things such as description, dialogue, or characters’ actions. This type of literary device is similar to flashbacks and used to create suspense and tension. For example, Jeffrey Eugenides used foreshadowing by leaving out key facts to prompt readers’ curiosity in The Virgin Suicides.

Hyperbole emphasizes the significance of the statement’s actual meaning by overstressing them. Therefore it is not meant to be taken literally by the reader. It gives comedic effects and emphasis. For instance, “I am so hungry, I could eat a horse.” The speaker here does not mean to eat a horse.

Irony creates a contrast between how things are and how they seem. In simple words, it expresses an opposite meaning than the one expresses by it. There are three types of irony in literature-

Verbal Irony:  When someone says something sarcastically.

Situational Irony: When something happens, that is opposite to the intended thing.

Dramatic Irony: When the reader is aware of what will happen before the characters do, then it is dramatic irony.

For example, Opening scenes from Orson Welles’ A Touch of Evil is an excellent example of how dramatic irony can create tension.

Juxtaposition is a comparison and contrast of two or more different ideas, objects, characters, etc. It generally helps to create a clearer picture of the characteristics of one object or purpose by comparing it with those of another.

For example, the opening passage from Charles Dickens’ novel ‘A Tale of Two Cities’ is the perfect example of juxtaposition.

Hence, this was the list of some different types of literary devices that writers often use in their writings to express their thoughts.