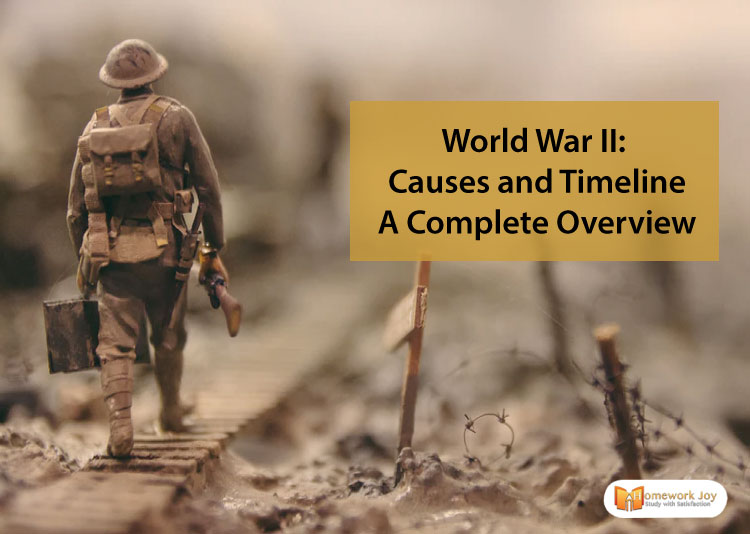 World War II is considered as one of the bloodiest and largest wars in history. The principal countries involved were the Axis powers—Germany, Italy, and Japan. And on the other hand, the Allies—France, Great Britain, USA, the Soviet Union and China. World war I created instability in Europe, which indeed set the stage for another conflict – World War II. The war broke two years later and proved to be even more devastating. The rising power in the unstable economy of Germany, Adolf Hitler reared the nation. He started signing treaties with Japan and Italy to further his ambitions of World domination.

There are various causes of the advent of World War II. Some of them are:

The Treaty was very harsh against Germany. The Versailles Treaty ended World War I between Germany and the Allied powers. Germany lost the war and was pressurized to accept the responsibility of the war damages. Consequently, the country’s economy was left in ruins, which led people starving.

Japan was growing rapidly before World War II. It was an island nation and did not have land or resources to sustain their growth. Japan began to look for ways to gain new resources. It invaded Manchuria in 1931 and China in 1937.

Hitler and the Nazi party became an authority in Germany. The Germans wanted someone to turn around their economy and restore their national pride. Hitler declared himself as the leader (Fuhrer) of Germany. Later he became the dictator of Germany. He began to rearm Germany while talking about peace. Hitler looked for ways to restore its power by expanding its empire. Firstly, he took over Austria in 1938. When the League of Nations didn’t stop him, he took over Czechoslovakia also in 1938. This was one of the reasons for World War II.

Before the advent of World War II, the economy was suffering much throughout the world. It came to be known as the Great Depression. The worldwide turmoil led to world war II.

The major events that took place between 1918 and 1941 sparked the first phase of World War II. The Timeline of events are:

World War II destroyed lives, land, and property around the globe. An estimate of 40-60 million people was killed, out of which 6 million were Jews. They were murdered in Nazi concentration camps as part of Hitler’s diabolical “Final Solution,” now known as the Holocaust.