Home » Learning » What is Giant Pacific Garbage Patch | An Overview 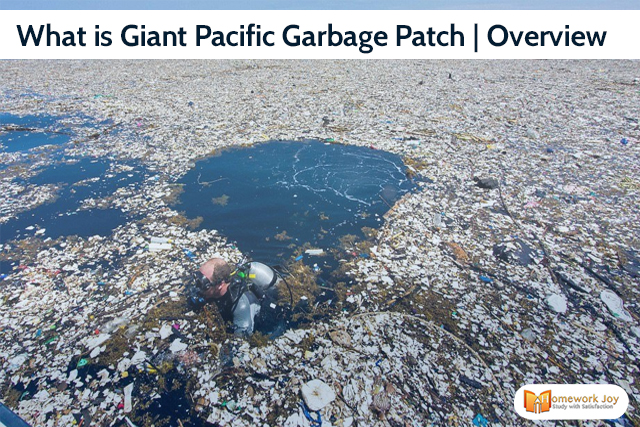 It estimates that 1.15 to 2.15 million tonnes of plastics enter the oceans each year from rivers. It incurs that more than half of the plastic is less dense than the water, which means that it will not sink when it encounters the sea. The stronger plastics show resilience in the marine environment allowing them to transport over extended distances. The plastics degrade into smaller microplastics under the effect of the sun, waves, marine life, etc. the more plastics discarded into the environment would lead to an increase of microplastic concentration.

The Giant Pacific Garbage Patch covers an estimated area of 1.6 million square kilometers. It is twice the size of Texas and thrice the size of France. The team of scientists conducted a sampling method to formulate this number. The research team crossed the debris area with 30 vessels equipped with sampling nets. The fleet collected a total of 1.2 million plastic samples. On the other hand, the aerial sensors scanned more than 116 square miles of the ocean surface. According to the researchers, 92% of the mass represented larger objects, while 8% of the mass consisted of microplastics.

How much Plastics Float in GPGP?

The estimated mass of plastic in the Giant Pacific Garbage Patch is approximately 80,000 tonnes. The weight is equivalent to 500 jumbo jets. The center of the GPGP has the highest density. It estimates that around 1.8 trillion plastic pieces seem to be floating in the patch. It is a plastic count which is equivalent to 250 pieces of debris. A mass concentration model produced to visualize the distribution of plastic in the patch. The Ocean Cleanup expedition proved that plastic mass distributes within the few top meters of the ocean. It is observed that larger pieces of plastic resurface more rapidly than the smaller plastics. The characteristics of plastic, such as age and type, prove that there is a capacity of plastic to persist in this region. A survey shows that microplastic mass concentration is increasing rapidly. It proves that the input of plastic is greater than the output.

Types of Plastics Found in GPGP

The majority of plastics retrieved from oceans were made of hard polyethylene(PE) or polypropylene(PE). Plastics were categorized into four classes within the plastic.

Why did Large Debris Matter?

It is observed that plastics persist in this region. It will lead to the breakdown of smaller plastics while floating in Giant Pacific Garbage Patch. The causes of deterioration in microplastics are due to sun, waves, marine life, etc. The microplastics are discovered floating on the surface layer but also far down the ocean’s surface. It is a well-known fact that microplastics are difficult to remove and are mistaken by food by marine animals.

Effect of GPGP on Marine Life

Plastic pollution is not just a risk to marine life but humans as well. Due to the size and color of plastic, animals confuse it with food. It leads to an overall danger to their behavior, health, and existence. According to recent studies, 700 species have encountered marine debris, and 92% of these interactions are with plastic. The plastic, when it enters the marine food web, it increases the chances of food contamination as well. As we know, humans consume marine species, and marine species consume plastic. It will, in turn, destroy the health of humans.

You can take some measures to make our oceans and other water bodies clean. Some of the measures given below:

Say no to plastic. Stop using straws, plastic polythene, bottles, etc. Plastic use spoils the environment and makes it harmful.

According to the studies, about 7,05,000 plastics come from fishing nets. From all the things that you can do, this would be the most impactful.

Participate in Clean-ups of Beach

It is the need of an hour. Before blaming others, let’s try to make a change. Giving a few hours a week for a day would make a change in the marine environment.

We cannot be proud of the giant pacific garbage patch. It’s time to wake up and make a change. Just reading the preventive measures won’t lead to change. Let’s join our hands together and make our earth a better place to live in.