Home » Learning » Everything You Need to Know About DNA 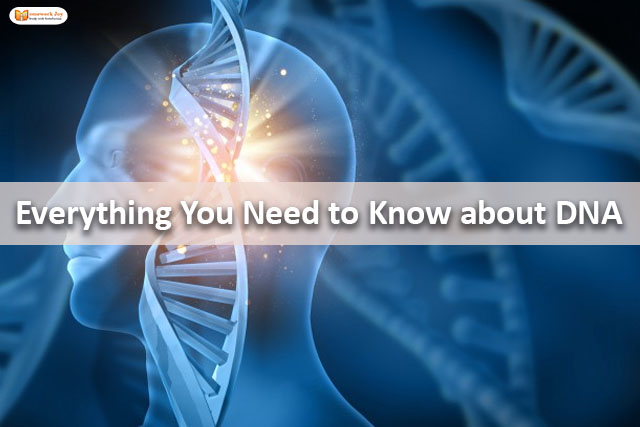 DNA, known as Deoxyribonucleic Acid, is a complex molecule that stores all the information which is necessary to maintain and build an organism. All living things contain DNA, and nearly every cell in multicellular organisms includes the full set of DNA. It is the primary unit of heredity in all living beings. In other words, we can say that, whenever organisms reproduce, the DNA has passed along to the offspring. The transmission of DNA helps in ensuring a certain level of continuity from one generation to another.  The DNA allows slight changes in organisms to maintain the diversity of life.

DNA is a molecule that stores the information needed to develop, live, and reproduce. This information and instructions are found inside every cell and passed down from generation to generation. The DNA is like a string that is repeated over and over and arranged randomly. It also contains the genetic code — the bases connected through chemical bonds. The different parts are under different selection procedures.

The question arises: what exactly is DNA? How smaller molecules made this complex structure and arranged? How is the information extracted and passed? To answer the questions, scientists continuously research DNA and make remarkable discoveries.

The History of DNA

The discovery of the DNA opened many broad paths in the field of biology. In 1866, Gregor Mendel first discovered the existence of hereditary entities (presently known genes). Later, in 1869, a German biochemist, Friedrich Miescher, observed DNA but was unable to explain it. The DNA was first figured out by James Watson, Francis Crick, and Maurice Wilkins in 1953. The famous X-Ray image that shows Rosalind Franklin took DNA’s double-helical structure. Rosalind worked together with James, Francis, and Maurice to know more about the DNA. The discoveries led the scientists to advance the world of biology, especially in medicines. In 1962, Watson, Crick, and Wilkins achieved a Nobel Prize in Medicine for describing the structure of DNA.

The Structure of the DNA

As the name suggests, the DNA is a nucleic acid. The building blocks of all organisms are nucleic acids. The nucleotides refer to the nitrogenous bases along with pentose sugar and phosphate backbone. Nucleotides are adjacently combined through a phosphate backbone and held together with the complements through hydrogen bonds.  The number of bonds that hold nucleotides from complementary strands depends on the type of nitrogenous base. 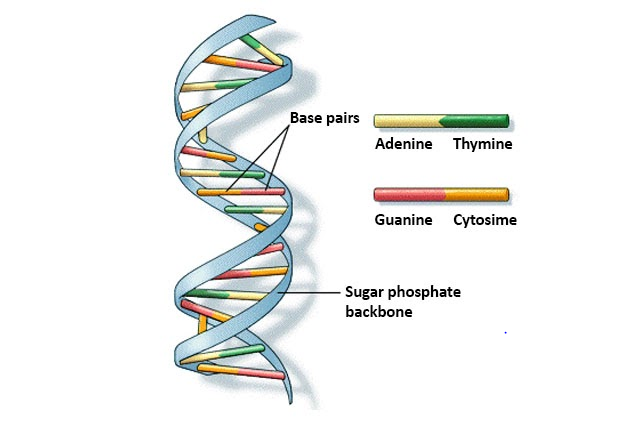 The nitrogenous base is a molecule with nitrogen that holds the chemical properties of a base. The nitrogen bases are vital for the DNA because they store the genetic materials. The pentose sugar connects the nitrogenous base with phosphate backbone. The DNA has four kinds of nitrogenous base: Thymine (T), Cytosine (C), Adenine (A), and Guanine (G). Thymine and Cytosine are pyrimidine and Adenine, and Guanine is purines. Pyrimidines have one ring, and purines have two rings. The DNA has almost 3 billion bases. According to the U.S. National Library of Medicine, 99 percent of bases are the same in all people. The sequences of nitrogen bases in a DNA sequence form genes.

The RNA or ribonucleic acid turns genetic information from DNA into proteins. The nucleotides joined together to form two long strands in the spiral to create a double helix structure. The bases on one strand pairs with the bases on another strand. The adenine pairs with the thymine and the guanine pairs with Cytosine.

What is DNA Packaging?

DNA molecules are very long that they can’t fit in cells. Thus, the question is, how does the DNA fit into the cell? The fact is that the cells contain approximately 6 billion pairs of DNA and about 2 meters of DNA present in per diploid cell! The DNA sequence is so long, so how does the nucleus manage to store DNA and other essential components for cell functioning? The answer is easy, through packaging and condensing.

Packaging of DNA in Cells

The histones proteins help the DNA to pack into the cells. Histones are small proteins that have positively charged amino acids, i.e., arginine and lysine. The charge of the DNA is negative because of the phosphate backbone. The histones neutralize and bind the negatively charged DNA. There are five types of histones, also called core histones, to help to package the DNA: H1, H2A, H2B, H3, and H4. These histones, along with DNA coiled around and known as nucleosomes. It takes two-part of each core histones to form a nucleosome. In nucleosome, H1 histone stays outside the coil holding the intact: the nucleosome and H1 histone together, known as chromatosome. The nucleosomes compacted into fibers known as chromatin. The bigger loops of the tightly packed chromatin make chromosomes.

The coiled and inaccessible state of DNA ensures DNA safety. With this much coiling, twisting, and packing, DNA can’t replicate. If DNA is unable to replicate, it can’t perform its functions. For working properly, the DNA needs to unpack and have to re-access it.

What is DNA Replication?

DNA replication makes a duplicate copy of the genetic information. DNA replication is essential for cell division. DNA replication begins in 5′ ®3′, which means that the bases will add from left to right direction. The template strand tells the new strand, which is the next base, and the process remains to continue until the new strand is complete, and the DNA becomes double-stranded. The old strands of DNA act as a template for the new strand. At the end of the process, there are two identical double-stranded DNAs available. In this way, the new cells will contain the identical information as the rest of the cells. 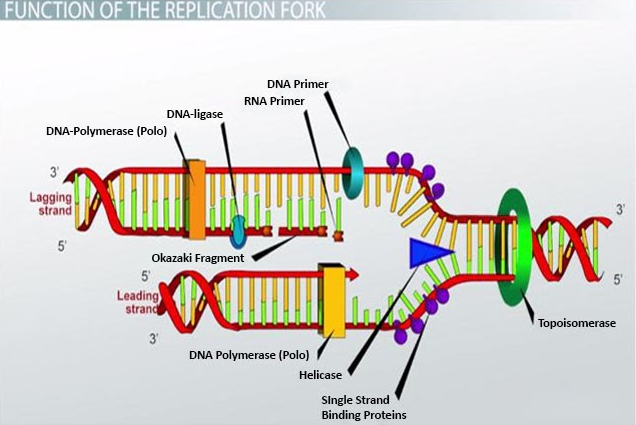 Replication of DNA to New Strand

The DNA is complementary, i.e., one strand is in the 5′ ® 3′ direction, and the other is in 3′ ® 5′ direction. The new strand is known as the lagging strand, and the old one is known as the leading strand. For replication, the DNA unwinds itself to form the new strand. An enzyme known as helicase helps to unbind the DNA strands. The single-strand binding proteins stabilize the template strands for the replication and hold -the strand opens until the end of the process. DNA polymerase III synthesizes nucleotides on the leading end in 5′ ® 3′ direction.

At the end of the process, DNA polymerase III completes the concoction of the new strand by attaching the DNA nucleotides at the end of the strand. Topoisomerase makes the small nick for releasing the tension.

DNA plays a vital role in everyone’s life, and it forms the basis for life. The discovery of the DNA structure led to significant innovations in the field of science and medicine. DNA is vital for the existence of living beings.