Home » Learning » What is the Kuiper Belt? Things to Know About it 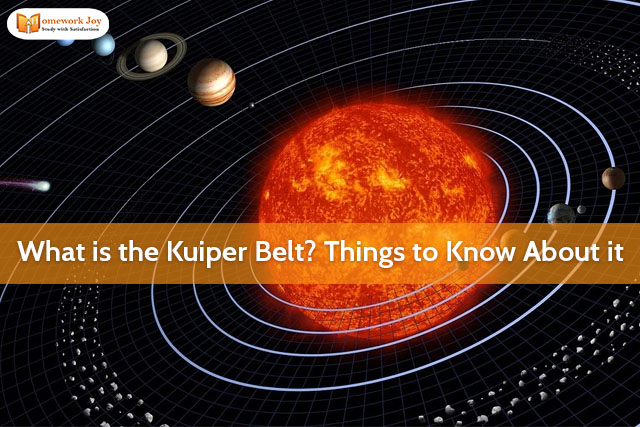 To begin with, this article, let us first know what Kuiper belt is. Beyond the gas-filled planet, Neptune lies a region filled with small icy bodies known as the Kuiper Belt. The belt is located beyond Neptune. This chilly region holds trillions of objects that are remnants of the formation of the solar system. The Dutch astronomer Jan Oort proposed that comets might come from far suburbs of the solar system. The reservoir later came to be known as Oort Cloud, named after the astronomer Jan Oort. In 1943 the astronomer Kenneth Edgeworth suggested and put forward his views that comets might exist beyond Neptune. In 1951, Gerard Kuiper predicted that a belt of small icy objects exists beyond Neptune. It is also widely known by the name of Edgeworth-Kuiper Belt.

Astronomers are now searching for the ninth planet in the Kuiper belt after the evidence of its existence unveiled.

How Does the Kuiper Belt Formation Take Place?

Much of the gas and rocks pulled together to form the planets and sun after the formation of a solar system. Objects that were at the edge of the solar system were far to avoid gravitational tugs of more massive planets like Jupiter. Therefore, they managed to stay at their place, slowly orbiting around the sun. Whereas the Oort Cloud contains the leftover remnants from the beginning of the solar system.

The Kuiper Belt’s most crowded section is between 42 and 48 times the earth’s distance from the sun. Thousands of bodies with 100 km in diameter travel around the sun within this belt, according to the scientists. These bodies move along with trillions of smaller objects known as comets. The region also consists of dwarf planets that are too large to be considered as asteroids but too small to be considered as planets.

Comets are icy bodies that consider being leftovers from the material that initially formed the solar system. They are also compared to the dirty snowballs and known as snowy dirtballs.

Pluto is considered to be a first Kuiper belt object. Although scientists didn’t recognize it as a KBO until further KBO’s were discovered. When Jewitt and Luu discovered the Kuiper Belt, astronomers saw that the region behind Neptune was full of icy rocks. Sedna, a KBO, is about the three-fourth size of the Pluto that discovered in 2004.

Sedna is very far from the sun and takes about 10,500 years to make a single orbit. Astronomers discovered Eris, which is slightly smaller than the Pluto in 2005. It orbits around the sun in every 580 years and travels almost 100 times farther from the sun than the earth does. Haumea and Makemake were dwarf planets discovered in the Kuiper Belt in 2008.

Six of the biggest KBO’s that have been discovered are:

These KBO’s have smaller diameters than the moon.

It is said that scientists have not seen the ninth planet. Its existence was inferred by the gravitational effects on the other objects in the Kuiper Belt. Planet Nine is a hypothetical word. It is thought to orbit the sun at a distance of about 600 times farther from the sun and about 20 times farther than the orbit of Neptune. Sheppard and Trujillo discovered 62 distant objects which make up 80% of those at the edge of the system. The two discovered dwarf planet nicknamed “the Goblin” and the “FarOut.”

The Kuiper Belt is thick, and concentration extends 10 degrees outside the ecliptic plane. The classical belt consists of being composed of two separate populations.