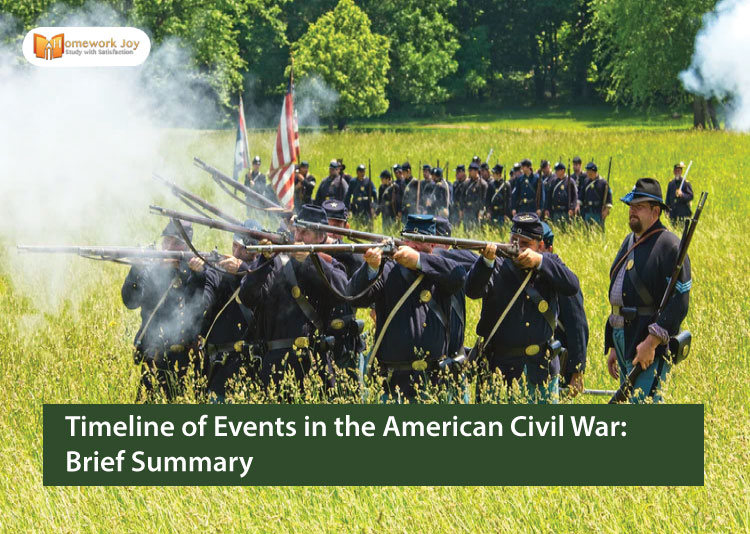 Also, the conflict between the Northern states and Slaveholding Southern states followed Compromises. As a result, the extension of slavery to the western states had reached a boiling point.

Firstly, whether the USA was a dissolvable confederation of states or a nation with a sovereign national government. Secondly, whether this nation, which is born of a mandate that all men are equal, would continue to exist as the world’s largest slaveholding country.

Events in the American Civil War

Slavery in North America arrived alongside Spanish and English colonists. Around 645,000 Africans were imported as slaves. The British colony of Georgia banned slavery from 1735-1750. However, it remained legal in the other twelve countries. After the American Revolution, the northern states passed emancipation laws. The sectional divide was visible as the South committed itself to slavery, one of the causes of the American Civil War.

After Louisiana Purchase, Congress had to establish a policy to guide the expansion of slavery into the new western territory.

Congress reached a series of agreements known as the Missouri Compromise. Missouri declared itself as a slave state. In contrast, Maine admits as a free state, preserving the Congressional balance. Thus, the compromise was a tip of the iceberg leading to the American Civil War.

It was a piece of legislation proposed by David Wilmot. If passes, the Proviso could outlaw slavery in territories acquired by the United States due to the War. Wilmot spent two years fighting for this Proviso. All attempts failed, but the intensity of the debate prompted the first serious discussion of secession. For this reason, Wilmot proviso is prominent in the event of the American Civil War.

Harriet Beecher Stowe’s exploration of slaves’ life was a cultural sensation. Northerners felt it was an eye-opener to the horrors of slavery. On the contrary, Southerners protested his work was slanderous.

It was the second best-selling book in America during the 19th century. The book opened to the issue of slavery alive and led to a discussion.

The Act established Kansas and Nebraska as territories by its adoption of popular sovereignty. Under sovereignty, the residents of the territories decide if the state is to be free or enslaved. Residents of the North and South poured into Kansas, hoping to swell the numbers on their side of the debate. Abolitionist John Brown came to Kansas to fight the forces of slavery.

Democratic Senator Stephen Douglas faced a challenge for his seat from Abraham Lincoln. They debated the most controversial issue of the antebellum era: slavery. Although Douglas won the election, Lincoln rose to the national spotlight. He was nominated for president in 1860. In contrast, the debates alienated Douglas from the southern wing of the Democratic Party. Also, the arguments Douglas made in these debates came back to haunt him in 1860 destroying his presidential chances.

Abraham Lincoln gets elected as the president despite being not included in May Southern ballots. His party has an anti-slavery outlook which struck fear among the Southerners.

The Ceasefire Agreement commenced with the Army of Northern Virginia at Appomattox Court House, by General Robert E. Lee. The agreement brought the hostilities of the American Civil War to a close.

On April 12, 1861, the warships turned back the supply convoy to Fort Sumter and opened a bombardment on the stronghold.  The garrison surrendered on April 14.

The Civil War was now underway.  In April, Lincoln called for 75,000 volunteers to join the Northern army.  Unwilling to contribute troops, Virginia, Arkansas, North Carolina, and Tennessee dissolved their ties to the federal government.