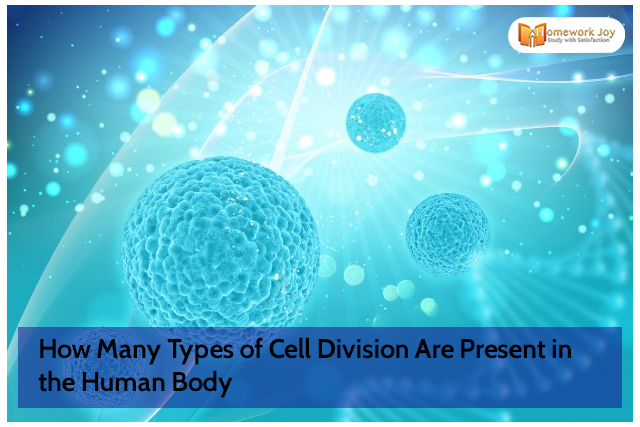 Humans have a complex structure made up of different types of cell division. They are trillions of cells present in the human body. Each cell has its structure and function. These cells carry out the most basic tasks that are necessary for human survival. But scientists claimed that the number of bacterial cells is more than the number of human cells. Thus, a famous geneticist, Herbert Spencer Jennings, says, “A cell of a higher organism contains a thousand different substances, arranged in a complex system.”

According to scientists, there are over 200 different types of cells in the human body. Different tissues combine to form specific organs. Thus, organs are like a factory where every type of cell division has its job. Similarly, every tissue has its function that contributes to the multiple roles of an organ. Thus, every kind of cell is essential. Here we are discussing different types of cell division that are present in the human body.

Types of Cells in the Human Body

As mentioned above, there are trillions of cells in the human body. The examples of the most important types of cells are the following.

What is Cell Division?

Now you must be wondering why cells divide? Here is the explanation. Early in your existence, you were one big cell. Not a complex person as you are today, with millions of cells. Besides this, the primary concern of the types of cell division is the maintenance of the original cells’ genome.

Mitosis is the process through which your body cells make replicas of themselves. It occurs throughout the majority of the human body’s cells, including eyes, hair, skin, and muscle cells. These are the only cells that do not divide through mitosis are sperm and egg cells.

Besides this, it allows dead and damaged cells get replaced without loss of function or form. In mitosis, chromosomes are replicated and then divided to produce cells that are identical to the original cells. The main feature of the mitosis is the creation of the daughter cells of identical cells.

The second type of cell division is meiosis. It is the process by which a single cell divides twice to produce four cells. These daughter cells contain half of the original amount of genetic information. These are our reproduction cell that is sperm in males and eggs in females.

Meiosis has further divided into nine stages. The daughter cells only have half of the number of chromosomes of the parent cells. Meiosis and mitosis have both similarities and differences since both produce two identical daughter cells.

Binary fission is also known as the division in half. It is a kind of asexual reproduction in prokaryotes, such as bacteria. The process of binary fission occurs in some single-celled Eukaryotes like the Amoeba and the Paramoecium. In this process, DNA replication and segregation occur simultaneously.

The fully grown process divides into two halves, which produce pools. The daughter cells are genetically identical. Also, DNA molecules divide into two DNA molecules. After that, these cells create room for each molecule to move towards the opposite side of the bacterium.

Thus, these were some types of cell division. It must be clear that cells divide for many reasons for the growth of living things. Besides this, organisms grow so that cells can divide to produce more and more cells.