Home » Learning » Facts About American Revolutionary War That You Must Know 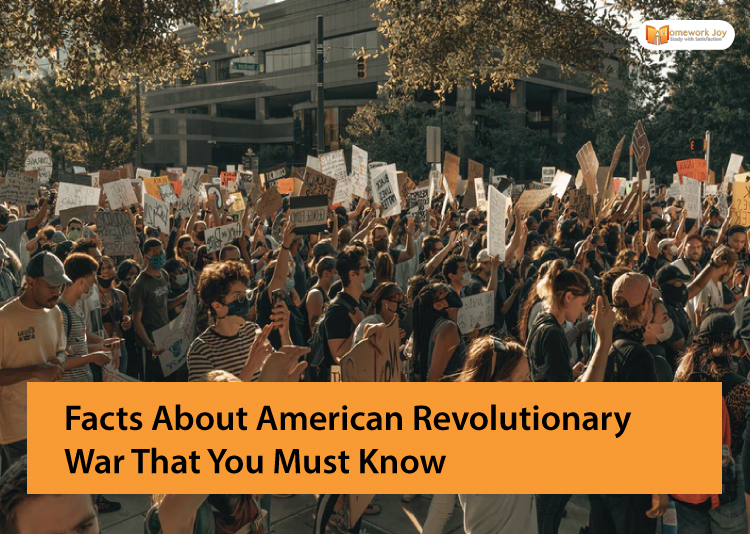 The American Revolutionary War (1775-83) arose due to the tensions between 13 North American colonies of Great Britain and the colonial government. These colonies were like the British crown. Since a small fledging nation won its independence from the greatest military forces, knowledge about War is essential from a historical perspective. That is why today we’ll discuss some facts about the American Revolutionary War.

Also, check out some of our new posts that might enrich your knowledge:

But before moving ahead with the facts, we must know what the American Revolutionary War means.

The Journey of American Independence Day

Cause of the American Revolutionary War

One of the main reasons against the rebel is that they felt that they were not represented in the British government. Besides this, the British government was making laws and taxes for the colonies. But colonies had nothing to say in this. Thus the colonies wanted their rights in the parliament. Also, they were reluctant to pay heavy taxes and live by British law.  All these reasons gave rise to the American Revolutionary War.

But the War didn’t happen right away. There were many protests and arguments before the War. After that, some battles started between the British colonists and the local British army. Over time, things got worse, and skirmishes turned out into the War between Great Britain and colonies.

Each colony created its local government. After that, in 1774, each of them elected officials who represented them at the First Continental Congress. Thus it was the first effort made by colonies to unite and make a single government. After two years that is in 1776, the Second Continental Congress declared American Independence from Great Britain.

The new government was different from the old British government. Thus the Americans decided they no longer wanted to be ruled by a king. However, they wanted a democratic government that would be ruled by people. People would be able to elect their leaders.  Since then, we are celebrating American Independence Day on July 4 every year.

The following are seven facts about the American Revolutionary War that you should know (Sources: History):

The Second Continental Congress appointed George Washington as the commander of the Continental Army. Indeed he was charismatic with leadership skills and had the experience of commanding troops in the French and Indian War.

However, according to Mount Vernon scholarship, he had limited experience as compared to the British in opposition. Back then, British rivals were the world’s most powerful military.  Despite his weaknesses, Washington succeeded in taking advantage of British forces.

Primary Cause of Death in War Was Not Combat.

During the time of the American Revolution war, the primary cause of death wasn’t combat but disease. That is why George Washington demanded to vaccinate the whole army against smallpox. Only due to this step, death by smallpox decreased from 17% to 1%. Also, the Continental army able to win the War.

When the War began in 1775, the colonies were in autonomies and not wholly separated from British rule. At that time, the Continental Congress, which was led by Americans, wrote to King George III that Independence was not their aim.

Also, they appealed to him to protect the colonies. But somehow British officers started treating Americans as their enemies. Thus it made colonials think that independence is the only option left.

The rhetoric of history represents Americans as the only defenders of freedom and the British as the threat to liberty. But that’s not true. It was British who stood up for the freedom of enslaved, not Americans.

American Revolutionary War Began Before the Declaration of Independence.

Although they lost the battle on the very first day but proved to the British troops that they could put up a fight, thus the tensions continued to lead until the complete independence of Americans.

Women Played an Important Role in the American Revolution.

Women had a significant contribution since the creation of the Continental army. During the War, they used to cook, did laundry and nursing of the military. Some of the women stepped on the battlefield and fought like men, while others worked as spies. For example, Anna Smith Strong participated in the investigating activities.

These were some interesting facts about the American Revolutionary War. Celebrate this Independence Day by reading books and staying at home. So you must read the following books:

Also, if you have to write an assignment on this topic, then you can use these books or take instant History homework help from our experts.