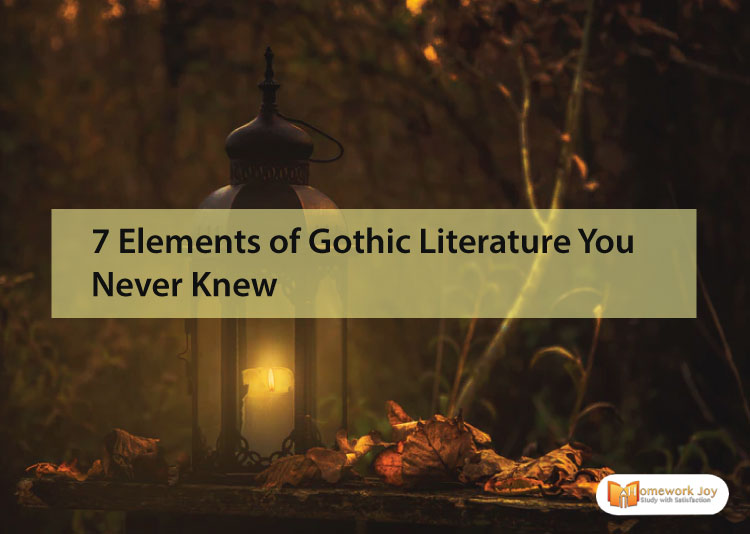 Literature is a fascinating topic for students. By studying it, you get the power to research and criticize. That is why today, we’ll enlighten the knowledge of those who are facing issues to understand elements of Gothic literature. Also, if you have any assignments to complete on the same topic, you can take help from this blog. Let’s be more precise about what we are going to discuss here:

Also, check the link below to become a better reader:

Benefits of Reading and Its Types | A Brief Introduction

The word “Gothic literature” was first used by an English writer Horace Walpole in ‘The Castle of Otranto.’ After this, around the 18th to 19th century, prominent English authors started using it to depict the tale of love, death, and supernatural elements. Soon after England, the trend of Gothic literature reached the US. As there are different elements of Gothic literature, it tells the stories, which are mystic, psychic, suspense, and so on. Although it tells stories of horror and supernatural elements, it still has Romanticism roots.

In the beginning years, writers followed the trend of starting their novel with old castles and dark backgrounds. Instead of directly describing horror, they used to describe it with the atmosphere. Due to these reasons, Gothic literature differs from traditional literature in the horror genre. Besides this, professionals in the early ages used to isolate themselves to have a strong command in the Gothic novel. They either used to cut off from the people or trapped themselves in the coffins.

Gothic literature is a writing art, lifestyle, or specific sensibility. This art deals with strange dark, mysterious, adventurous stories. The plot of these stories is mostly related to the dark and gloomy places like church, ruined castles. As a more basic understanding, it is a literature with fancy writing style particularly related to dark romanticism. Thus the dark romanticism has expressions of terror, supernatural elements, and wicked pictures. Also, the elements of Gothic literature have undergone many revivals since its inception.

Some Elements of Gothic Literature

Although most of us are afraid of monsters and ghosts, we still like to read about them. That is why some writers are more inspired to write ghost stories. The following are elements of Gothic literature which are easy to find in all novels of this genre:

Gothic literature writers more often use remote physical locations to create a dark atmosphere and setting. They take extra care that their novels contribute to the feeling of fear and uneasiness. Thus they use environments like dark forests, ruins of castles, claustrophobic interiors with hidden doors, and threatening storms.

Besides this, their plot also contains fearful things to emphasize terror like hidden skeletons, death of some characters, and derelict churches. Likewise, Gothic writer Mary Shelley uses locations like graveyards and gloomy castles to emphasize dark plots of her novel Frankenstein.

Among the elements of Gothic literature, romance is often used by writers. The novel characterizes a passionate romance, which leads to sorrow and tragedy. The perfect example could be the famous works of Charles Dickens. His writing style centered romantic love-affairs, along with horrifying villains and Gothic settings.

Mystery and horror are the most critical elements of Gothic literature. The novels aim to evoke feelings of fear, terror, disgust, dread, suspense, etc. in the readers. Thus Gothic atmosphere plays a crucial role here. The writing style contains objects of fear, such as hidden skeletons, flickering candles, burials, and others. Ann Radcliffe’s novel ‘The Mysteries of Udolpho’ includes these types of fearful objects to create a haunting and mysterious atmosphere.

Gothic literature always has a pinch of supernatural or paranormal activity. That is why you’ll notice that inanimate objects are coming to life, monsters, demons, witches, ghosts, vampires. For example, Bram Stoker’s ‘Gothic Fantasy, Dracula’ and Toni Morrison’s ‘Beloved.’ These are some less conventional traditional Gothic novel.

Different types of literary devices are used to hint visions, curses, and omens throughout Gothic literature. Besides this, the authors use black magic and tragedies leading to some bad luck. These mishappenings lead to derailing the lives of the main characters. The classic example is Edgar Allan Poe’s short story ’The Black Cat.’

Melodrama, high emotions, emotional distress are essential elements of Gothic literature. Since these elements help to convey the fear and terror inherited in the characters, Gothic writers often use them. In the 20th century themes of Gothic literature depicts the condition of psychosis.

Much like traditional literature, villains play a vital role in the Gothic novel. Moreover, villains are autocratic male characters who possess some powers or own kingdom. You’ll notice they are charged with so many murders, robberies, women abuse, and inhumane acts, and so on. Robert Louis Stevenson’s ‘Dracula and Mr. Hyde is the best example to understand villain characters of Gothic literature.

Gothic literature encompasses a wide range of stories until now. It is a popular style of writing both in the modern and historical world. Besides this, if you need online assignment help related to the literature topics, get our experts’ advice instantly. Our experts are readily available to help you.