Home » English » 8 Parts of Speech | Learning the Basics of Grammar 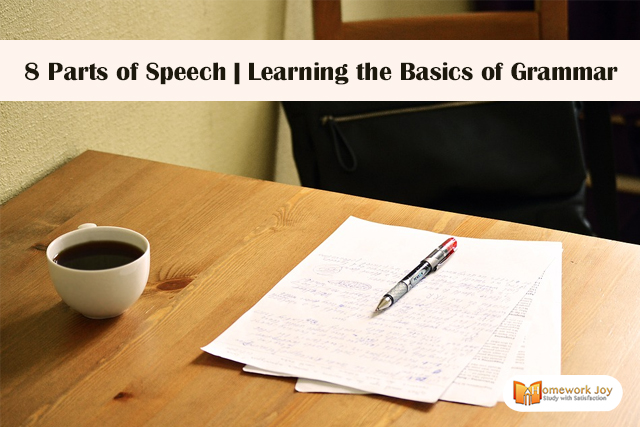 Learning parts of speech will help us to understand the language. It will also tell you how the language functions, so that you will be able to improve your reading and writing skills in no time.

In traditional grammar, the part of speech is a category of words, which have similar grammatical properties. These words play similar roles within the grammatical structures of sentences. English grammar has eight parts of speech in the English language like noun, verb, adjective, adverb, pronoun, preposition, conjunction, and interjection.

The part of speech enables us to know how the word functions in meaning as well as within the sentences. However, an individual word can function as more than one part of speech when used in different circumstances. Understanding parts of speech is necessary for determining the correct definition of a word.

A noun is the name of a person, place, thing, or idea. For example, house, man, etc. Nouns generally used with the articles. Proper nouns always start with a capital letter, but common nouns do not. They can be plural or singular, concrete, or abstract. To show possession, we have to add‘s’ in the nouns. In a sentence, the noun can function in different ways. Since a noun can become a subject, subject complement, direct object, or object of a preposition. For example, a girl brought me tasty chocolate.

The pronouns are words used in place of a noun. For example, she, we, it, they, etc. It usually substitutes for a particular noun. Hence, they are also known as antecedents. The antecedent for the pronoun “she” is “girl.”

In a sentence, a verb expresses action or being. A sentence also has a main verb and sometimes one or more helping verbs. For example, she can play. Play is the main verb and can is the helping verb. The verbs in a sentence must agree with its subjects in number. As both are singular or, both are plural. Verbs take different forms to express tense. For example, she quickly disappeared.

An adjective describes or modifies a noun or pronoun. They answer the question of which one, what kind, or how many.  Articles also classified as adjectives. Adjectives usually come before a noun. For example, high heels, thirteen people, etc. Sometimes adjectives describe qualities that can exist in different amounts or degrees. Besides this, there are four demonstrative adjectives— that, those, these this, which are identical to the demonstrative pronouns.

It is the part of speech that describes or modifies a verb, an adjective, or another adverb. For example, gently, extremely, well, carefully. They answer the question of when, where, how, under what conditions, or to what degree. Most adverbs end by adding “–ly.” For example, she brought me a very long letter. They often limit or restrict the meaning of verbs.